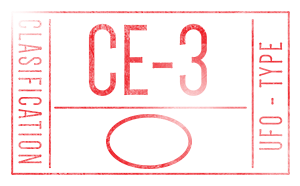 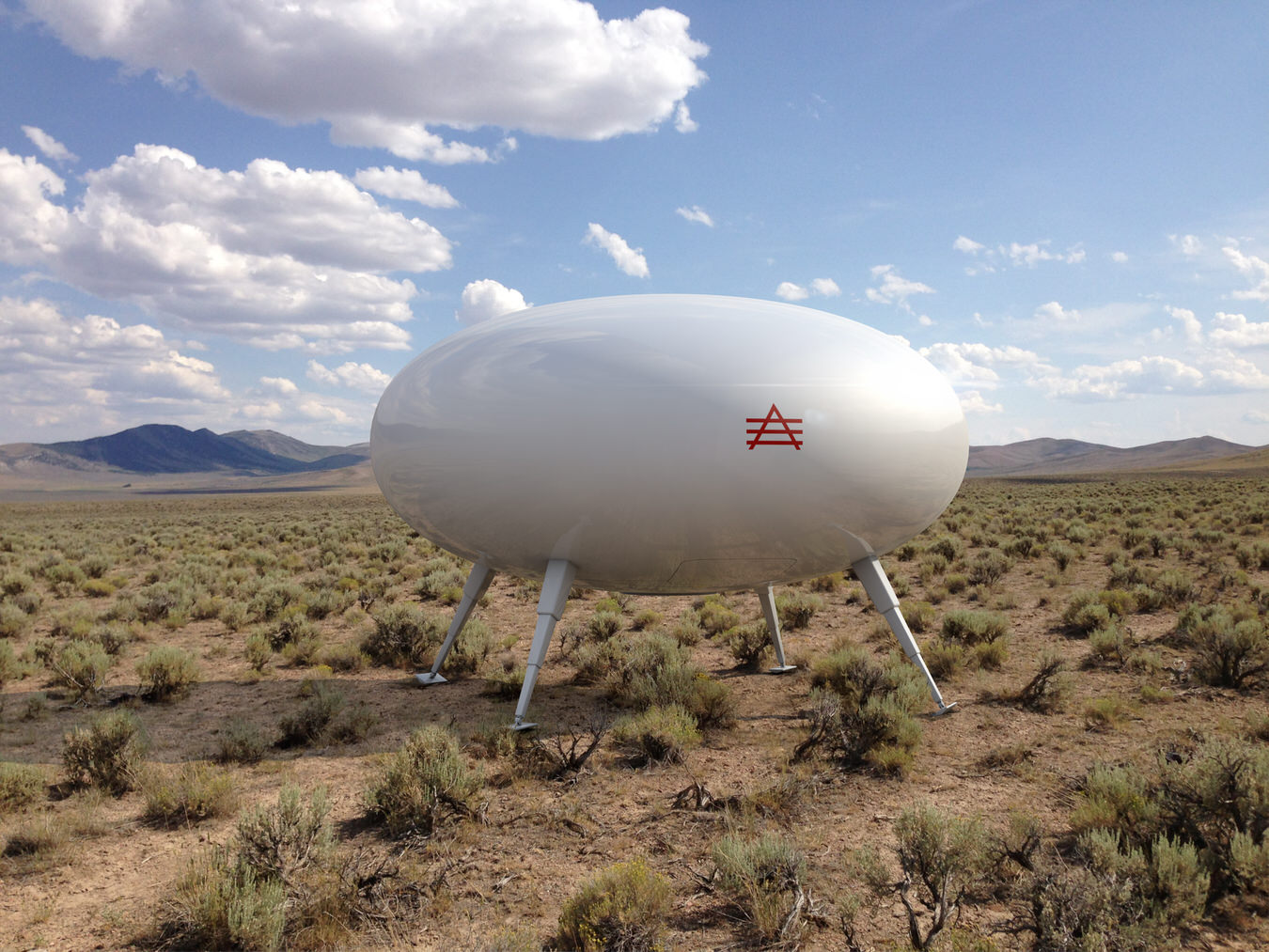 On April 24, 1964 at approximately 5:45 pm, Socorro police officer Lonnie Zamora began pursuing a speeding vehicle just south of town. He then says he heard a “roar,” and he broke off his pursuit to investigate. He knew of a nearby dynamite shack and decided to go take look to see if it was the source of the noise. He also noticed a flame in the sky. He said it was a bluish orange and appeared to be descending. He says he could not focus on it because he was paying attention to the road. A part of the dirt road was very steep and he had trouble getting over it. When he did crest the hill he noticed a white object on the ground out in the desert and two people in coveralls near it. He said the object looked oval and white. It also seemed to be on two legs. He thought it might be a car wreck, so he raced down the road to help. He called dispatch to let them know he would be assisting in a car wreck.

When he got closer to the object he pulled his car around, stopped to radio in that he was leaving his car, and then got out. He fumbled with the radio handset, and just as he turned around, he heard a loud “roar (was not exactly a blast).” He said the object began to rise and it had a blue flame under it. He said the bottom of the flame looked orange. At this point he also noticed the object was smooth with no windows and it had an insignia on the side. He was afraid the thing was going to explode, so he ran. As he ran around his patrol car his leg hit the fender and he fell down. He glanced back and saw the object was still rising, and the roar kept getting louder. 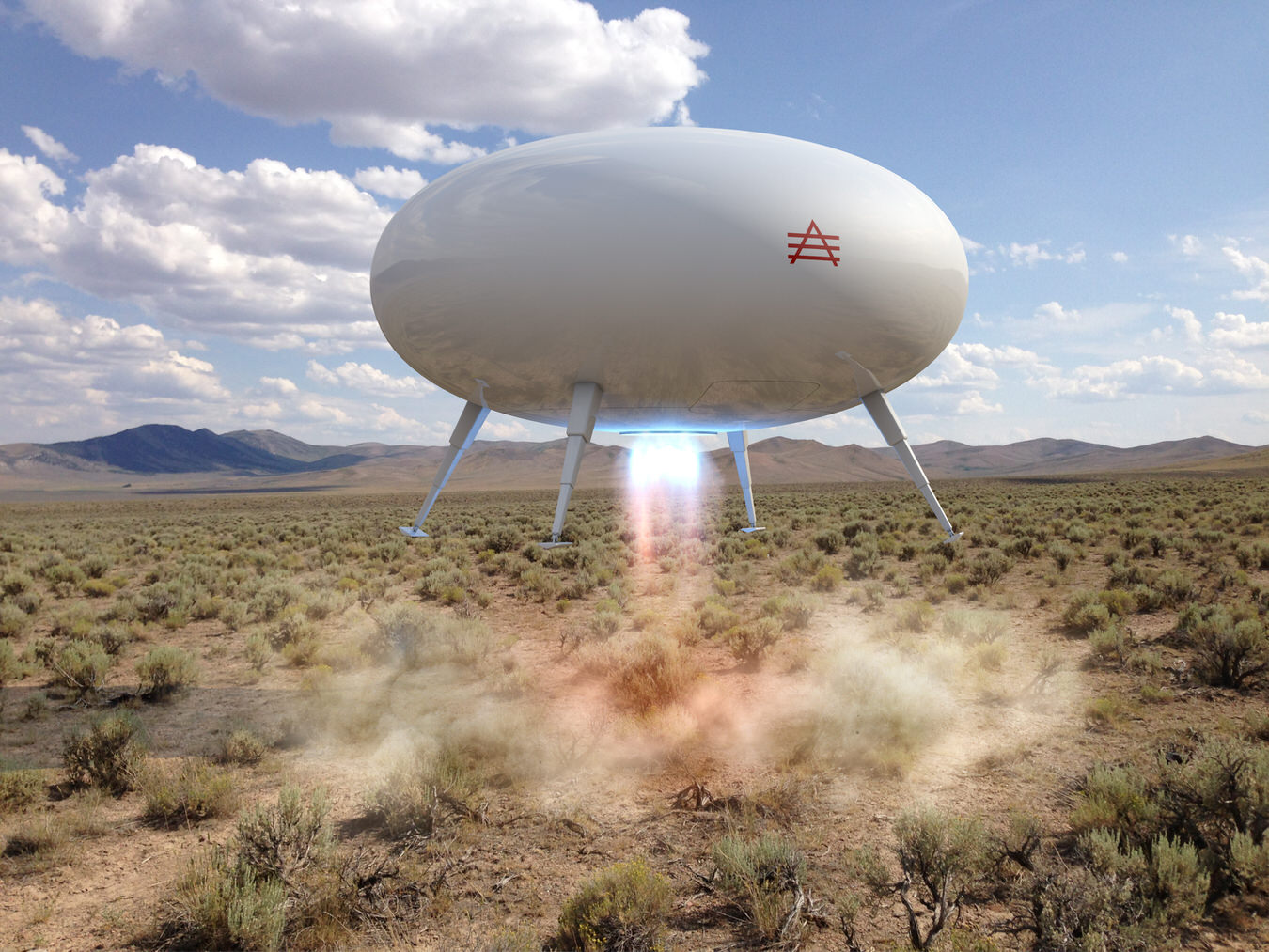 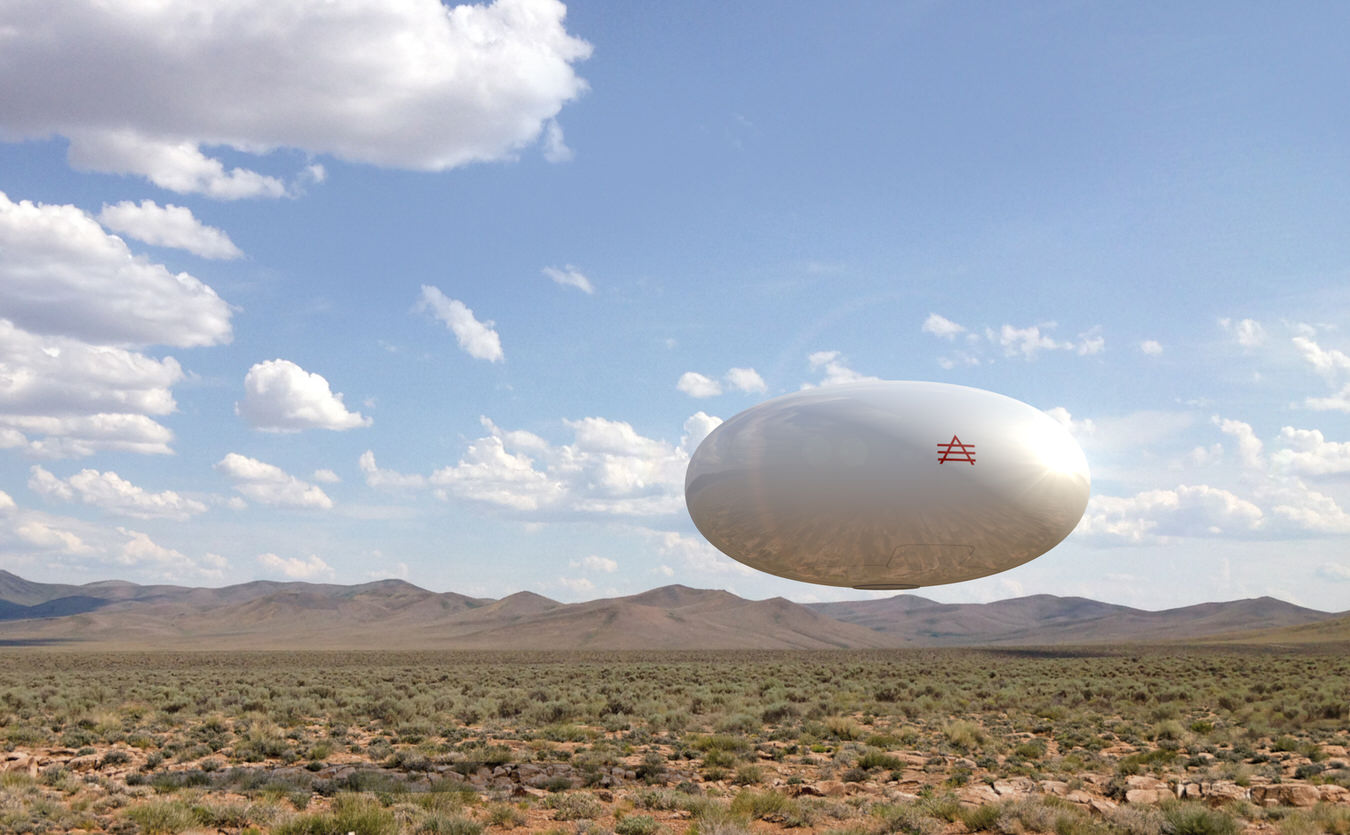 Zamora got up and kept running from the object, finally jumping over a hill for cover. He said the sound stopped. He had planned on continuing to run, but he noticed the object was now moving away. It was only about 10 to 15 feet from the ground. It flew over the dynamite shack, just clearing it by a few feet. It flew off following the contour of the ground, never higher than 20 feet or so, until Zamora lost sight of it. Zamora went back to his car and asked the radio operator to look out of the window to see if he could see the object. The dispatcher didn’t see anything. Then New Mexico state police officer Sergeant Chavez arrived on the scene. Chavez asked what was wrong. He noticed Zamora looked out of breath and pale. Zamora told him the story, and they went to look at the area the object had landed. When they got there they noticed a burnt bush and impressions in the ground left by what appeared to be landing gear.

Zamora’s sighting made it into local newspapers and caught the attention of the U.S. Air Force’s Project Blue Book, their official investigation into UFOs. Investigators were impressed with Zamora’s credibility. They were also impressed with the physical evidence. A burnt branch from the bush and the soil at the site of the impressions were analyzed. However, nothing unusual was found. They also tested for radiation, but levels were normal. There was burnt cardboard found on the site, but Blue Book’s scientific advisor, Dr. J. Allen Hynek, said it was old. He felt it was probably blown by the wind under the bush that got burnt, and was not sturdy enough to be part of a hoax. He noted many bushes in the area had paper or cardboard brought in by the wind stuck under them.

Blue Book director Hector Quintanilla said, “[Zamora] is puzzled by what he saw and frankly, so are we. This is the best-documented case on record, and still we have been unable, in spite of thorough investigation, to find the vehicle or other stimulus that scared Zamora to the point of panic.” This case has continued to be important in UFO research, and occasionally finds itself back in the news. In 2009, a professor and former students from New Mexico Tech said they thought they might know who hoaxed it. They thought it was an elaborate tricked played on Zamora. However, they did not produce anything definitive.

Over the years, the craft witnessed by Zamora has most of the time been depicted with a red insignia based on a design released to the media in 1964. However, recent findings indicate that in fact Captain Holder obtained Zamora’s agreement to not divulge the real design of the insignia he saw in red on the observed craft. Therefore a modified one was submitted instead. The main reason behind this request was that, if another witnesse came forward, it would be a way to validate whether he was telling the truth or not. There is no written document today that shows the actual markings that Zamora saw that day. Only verbal descriptions remain. [The design was an inverted V with three bars crossing it]. Ray Stanford discovered a copy of an important letter in the Archive’s Socorro files from J. Allen Hynek sent to Major Hector Quintanilla at the United States Air Force’s Foreign Technology Division at Wright-Patterson AFB, with Hynek’s own drawing of the insignia Lonnie Zamora reported [B2]. This drawing also depicts an inverted V with three lines, but with some changes in their length and placement.
Full article here

In January 2015, Ray Stanford revealed new evidence based on the data found on two handwritten documents about Hynek’s interview with New Mexico State Police Sergeant Sam Chavez, where one can clearly see the correct design of the insignia as described by Sergeant Sam Chavez based on what Zamora told him immediately after his arrival at the site. [B1]
Full article here

A1, A2, A3 – ‘Decoy Insignia’ and alternative variations.

B2 – Hynek’s own drawing of the ‘Insignia
Sketches of the object and the insignia on its side made by Zamora from the U.S. Air Force Project Blue Book

With the December 2010 New Zealand government UFO file release regarding this case, and with the main body of these papers with some censored folios, still revealed fascinating further detail, and tantalizing allusions to sensitive details. In fact as the 1959 investigation progressed from CONFIDENTIAL classification to TOP SECRET. Based on clues presented on the document like a full height drawing of the ufonaut with a great grade of detail regarding his gear and physical characteristics, seems to indicate that Mrs. Moreland had a “very” close encounter indeed.

The initial story was to the effect that she had only seen a craft descend, hover and then ascend. She subsequently told the investigating officer about the landing of the man, who she described as “like any other man” as far as she could tell, though his left hand was “missing below the wrist”. This ‘man” shouted at her in a foreign language. In a fright she hit out with her torch and ran for nearby trees. The man re-boarded the vehicle, which was hovering some 10 -12 feet from the ground. It then ascended straight up into the sky emitting a high-pitched whistle and leaving a patch of hot air and a smell like that of burnt pepper.

A more in depth research can be found at the theozfiles blog for your consideration.

Some of the sketches presented on the 2010 declassified UFO materials by the government of New Zealand regarding this case. 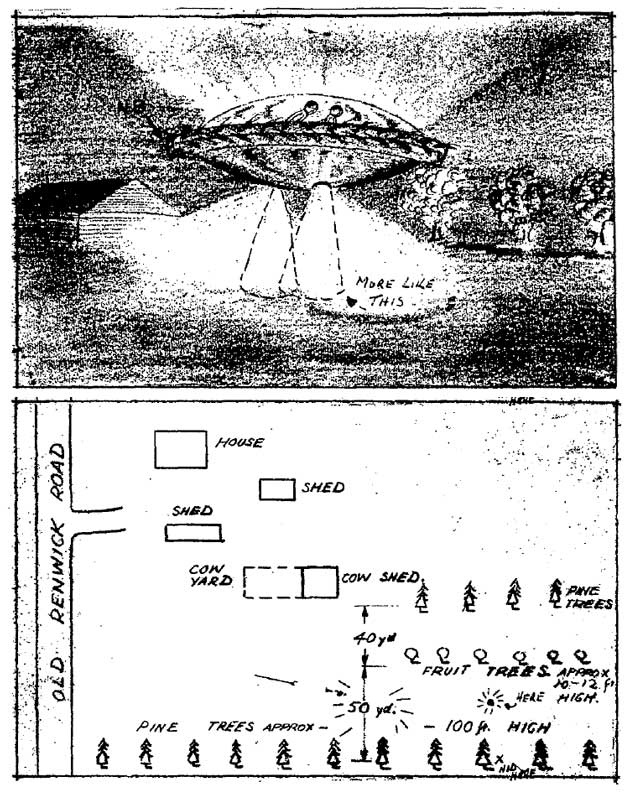 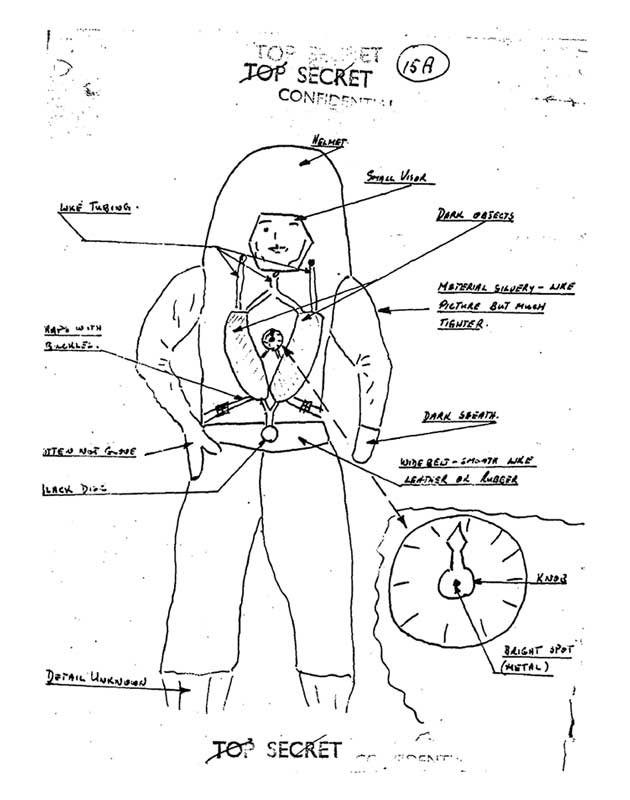 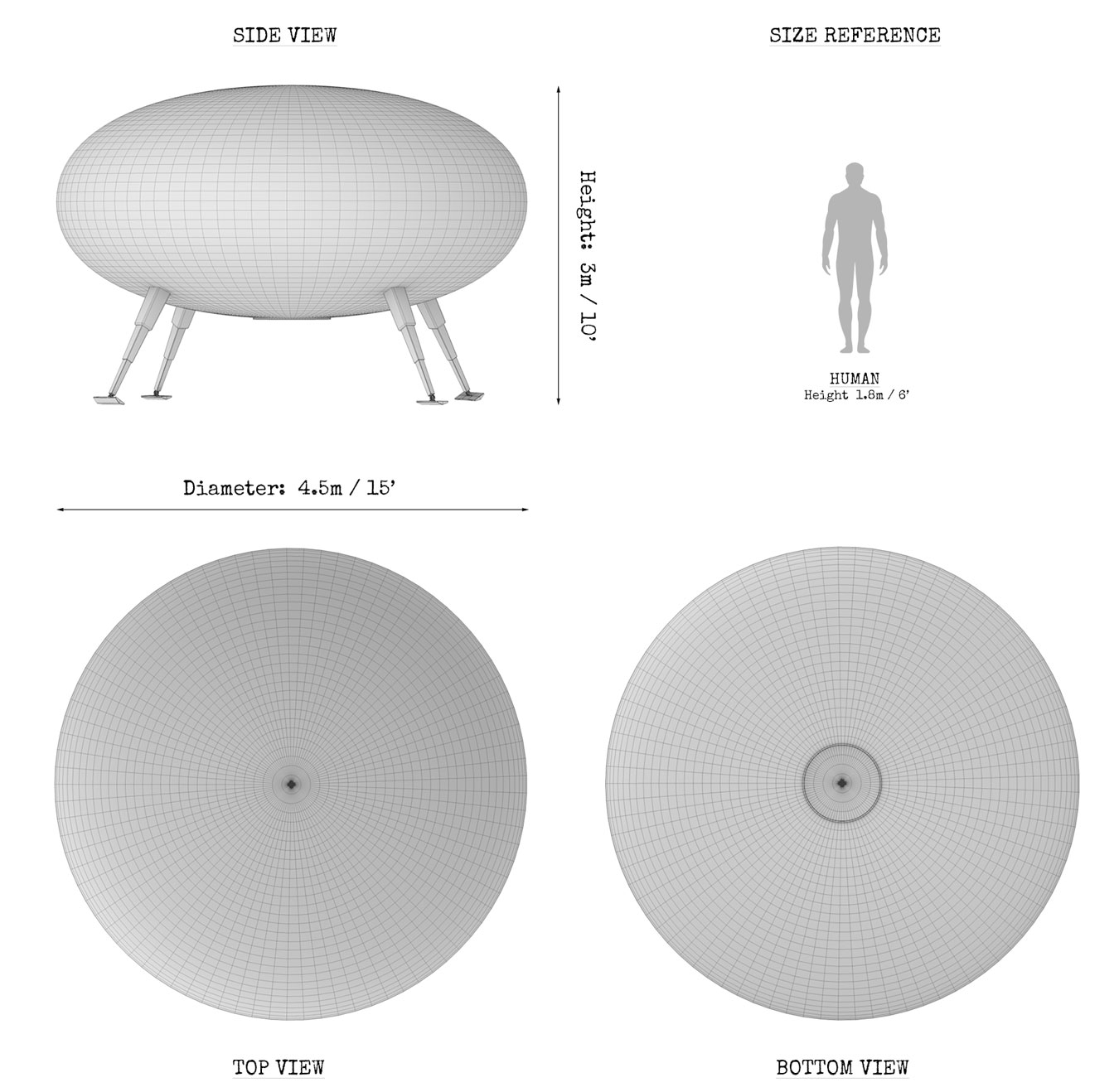