The boy that encountered a flying box 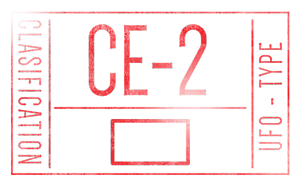 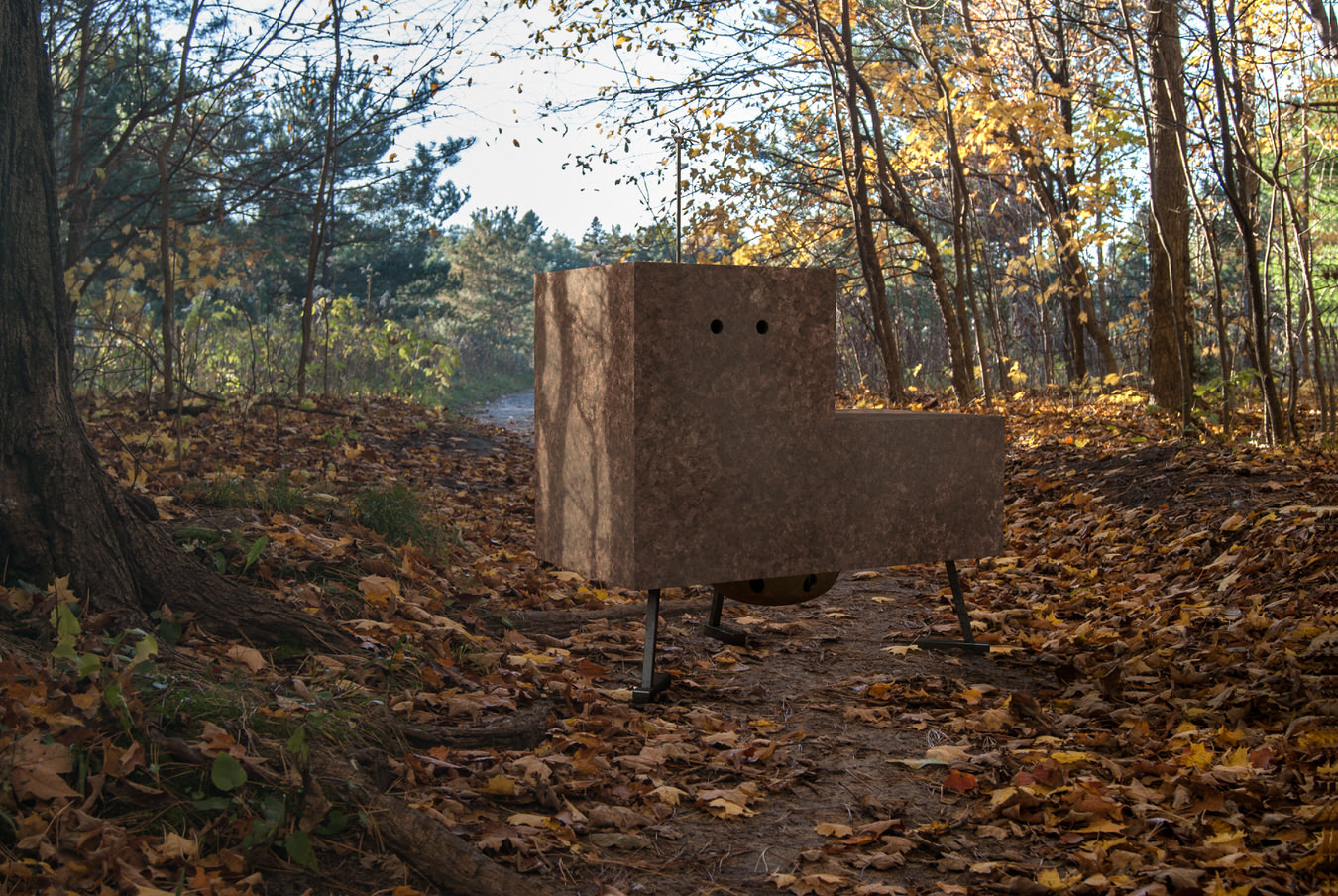 On March 29, 1966, at approximately 4:15 P.M., Benjamin Brackett (age ten) was walking with his Dalmatian dog in a woodlot behind his home toward a small pond. He walked this route a few times a week. When turning off a rough woods road onto a path leading up a long wooded ridge, he noticed something silver on top of the ridge, which he first thought was radar chaff caught in the branches of a tree. He moved off onto the path and could then see that it seemed to be a roughly spherical mass of shredded silver material affixed to the top of a vertical silver rod that stuck up out of what appeared to be the top of a box about one hundred twenty feet away. As he walked closer, the silver rod could be plainly seen. It was about the same thickness as a pencil and about one-and-a-half feet in length.

The boy’s next thought was that this “thing” must be some experiment placed there by a neighbour, a consultant physicist, who lives on an adjacent farm. The physicist was known to conduct experiments in his electronics laboratory located in a barn on his property. The witness took his eyes off the “box” for a moment and when he looked at it again, the silver shaft had disappeared. He was only seventy-five feet from the object at this point, As he continued to walk up the path toward the object, he saw that it was a box shaped like an el lying on its side with tripod legs. Curious, he increased his pace while his dog ran ahead and began sniffing it. Apparently not interested, it continued on its way into the woods. When he got within twenty-four feet of it, he stepped off the path and stepped slightly behind two trees. It was at this point that he realized he was not sure what it was he was looking at.

Suddenly, without warning, there was a terrific blast of air from the direction of the object and debris flew all over. Simultaneously, there was a short high- then low-pitched sound as the object lifted off from the ground about a foot, stopped in midair, swung around in a clockwise motion and settled down on the ground again! This maneuver was about four seconds in duration. The object had risen with a perfectly vertical motion in an unwavering, mechanical-like manner. It was all too obvious that this object had nothing to do with his neighbour’s experiments. The thought that it must be some kind of Air Force hovercraft raced through his mind as curiosity suddenly changed to terror! He did not know whether to run or what to do! Then strange electric-like sounds came from within the “box” and he froze to the spot!

The witness found himself facing the intermittently humming object about broadside, with its longest side about parallel with him. He got a good look at this side of it. On the upper left side, which was higher, there were two round black holes, which seemed to be just under an inch in diameter. These appeared to be definite opening, not just markings, and were recessed into the object about an inch. They were spaced about six inches apart and centred in the upper left portion appearing like eyes watching him. He saw nothing inside these holes. Centred and attached to the middle of the object’s underside was a round appearing section protruding downwards that looked like a dishpan or flattened dome. It was about two feet in diameter and had three two-inch openings spaced around that part of the circumference facing the witness. The holes were more egg-shaped than round and were like an egg standing on end. He never noticed if there were similar holes continuing around the circumference of this domelike protrusion.

The colour of the boxlike part of the object was a brownish hue that blended well with the trees. Its surface was somewhat like that of unevenly rusted steel but looked more like the pitted surface that cork displays. It looked more nonmetallic than metallic. The object had definite sharp edges, its extremities were not rounded. The domelike section appeared to be of similar material but darker and more like metal. The tripod legs were square shafts about one inch in diameter. They appeared to be about one foot long and were attached to the bottom of the object around and slightly away from where the dome was attached. Each leg angled out slightly and had a pad attached on the end. The pads were about one foot long and about two inches square. The legs were attached about three inches inwards and about nine inches of the pad toed inward, forming “V” shapes relative to one another. They appeared to be constructed of a very dull, non-shiny metal.

Intermittent sounds came from the object. While wondering what to do next and thinking about turning around and running, the boy hesitated as he heard a series of intermittent electric-like sounds coming from within the object. A “humming” was as close as he could describe these sounds. The sound stopped and started three to four times in a random rather than in an evenly timed fashion for about one minute. Suddenly a huge blast of air rushed out from the domed underside of the object sending pine needles flying about in all directions! The witness compared the blast of air to facing a stiff wind or standing about fifty feet from moving helicopter rotors. Concurrent with this blast of air was the same sound he had heard when it had ascended before but much louder. The loudness and pitch increased as the box-shaped craft ascended. He saw no lights, flame, or exhaust and smelled nothing unusual. The object rose in a perfectly straight vertical fashion until it reached an altitude of about ten feet. 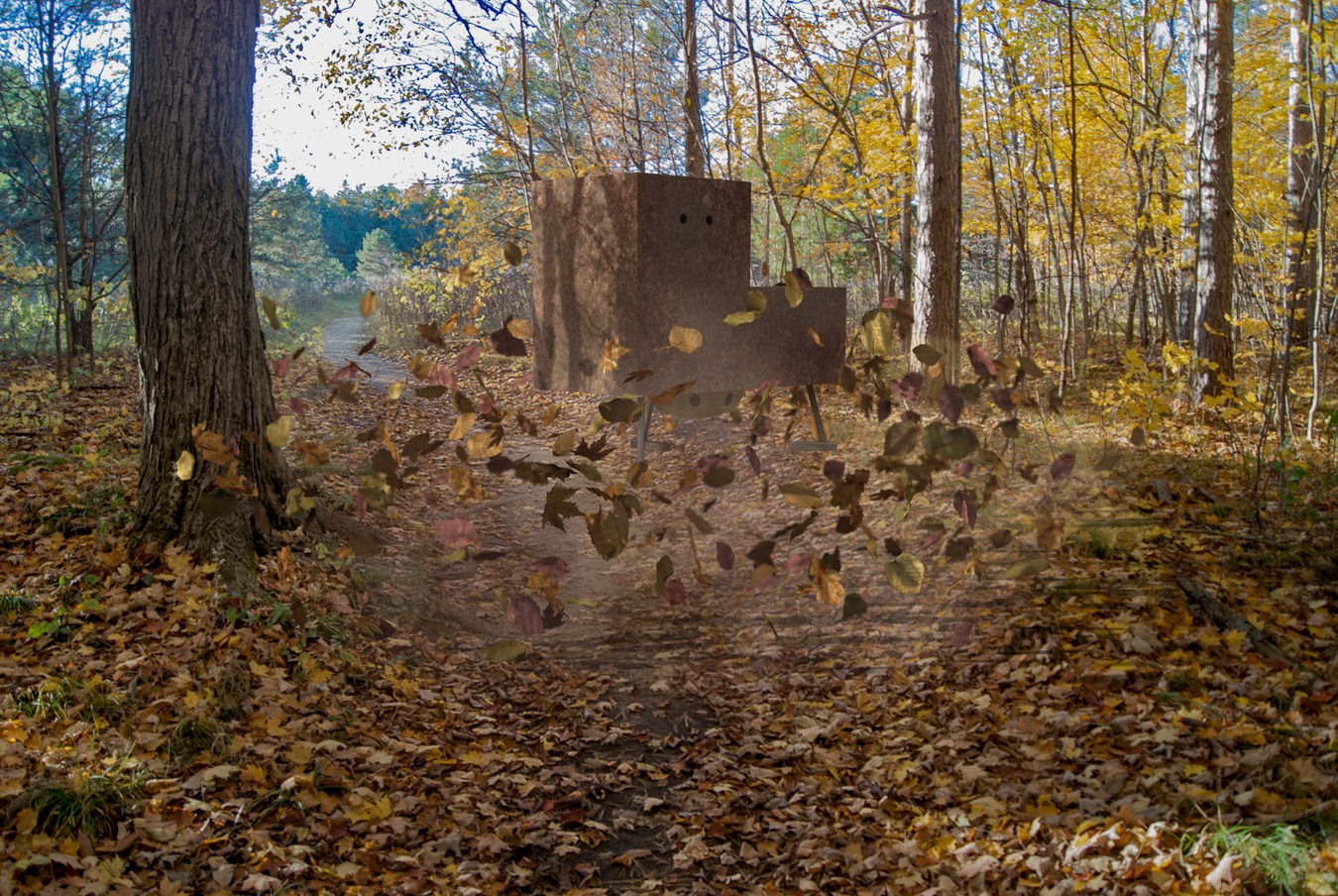 It then stopped for a split second (the loudness and pitch of the whining sound levelled off at this point) and then moved quickly on a perfectly straight horizontal course for about twenty-four feet. As it moved, the pitch and loudness of its noise remained the same. The witness saw and felt nothing that would indicate a sidewards propulsion blast. At this point, the object again stopped and swung around clockwise in midair for about ninety degrees before accelerating straight up and out of sight behind tree branches. He described the speed as being as fast as a solid fuel ground-to-air missile. Simultaneously with its final ascent was a great increase in the pitch and loudness of the whining sound. He heard the sound from above die down as if the object continued to recede away vertically.

Upon the object’s departure, the boy immediately turned and ran home, shouting for his mother as he went! An on-site timed reenactment of his run along the identical route took just about two minutes.During the boy’s encounter with the UFO, his mother had opened a window and was talking to her daughter, who was skating on some ice about seventy-five feet from the house. The window was facing in the general direction of the sighting area but was in under trees that blocked a clear view of the sky. Suddenly, both mother and daughter heard a strange whining sound fill the air! They told me that it sound like “an elevator which started up, stopped at the second floor to pick up a passenger, and then restarted and moved nonstop all the way to the top floor.” Their description corresponded with the sound associated with the final maneuver of the UFO. Then, they told me, they could hear the son’s voice yelling from up in the woods. He arrived out of breath and so excited that he could hardly talk. The boy finally blurted out what he had seen to the mother, she warily followed him back to the sighting area.

Upon arriving at the place where the object had been, they found a circular impression seemingly blown out of the heavily matted area of pine needles. It was about two feet in diameter, about four to six inches deep at the center, and shaped somewhat like a large shallow bowl. Elongated impressions were visible around and outside of the depression’s circumference. The witness’s mother told me that they resembled the impression that a ruler might make if laid flat on the pine needles and pressed down about one inch. They then returned to the house, where she asked her son to draw a sketch and write out a description of what he had seen. She said his hands were literally shaking as he sat down at the kitchen table with pencil and paper. 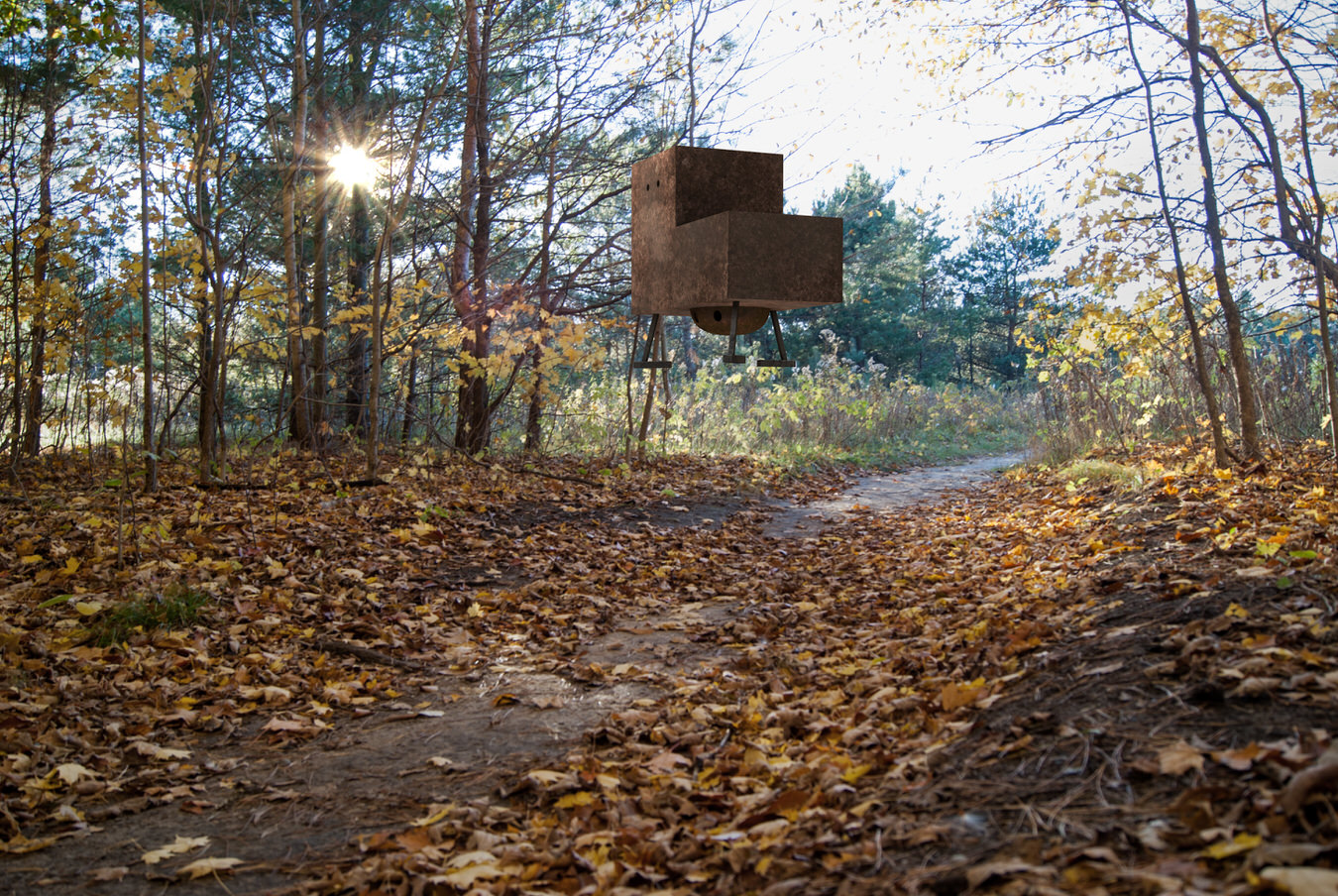 The witness’s father made the following observations about the physical traces and the sighting area:

The centre depression was perfectly smooth and rounded and had to be “mechanically made.”He saw no traces of foreign substances or scorching. He sniffed around the markings but did not smell anything. The round impression appeared to have been smoothly blown out of four inches of pine needles and two inches of earth. He found a freshly broken twig about two feet long and about the diameter of a pen on the ground under the horizontal flight path of the object. The object had been sitting under a near-solid canopy of white pine. It could not have come down from the sky through them but would have to have been intelligently guided down through, in and under these pines, in just the reverse of the way it had left the area. He expressed some dismay as to how an object of that size and corresponding weight could be lifted up by a reaction-type engine. There was no residue or scorched area and no violent markings such as would have been made by a jet engine.

After the father had interrogated his son, he phoned a friend of his who was acquainted with a state policeman in order to find out what the procedure was for reporting UFOs. The state police officer told his friend that they had been ordered to relay all such UFO reports directly to Pease Air Force Base and drop the matter. He advised against reporting the incident because the Air Force might ridicule the witness and the newspapers might somehow get hold of the story. He warned that any publicity would attract all kinds of publicity seekers to his property. That was enough for the witness’s father! He never officially reported the bizarre episode.
Fig.1 Detailed schematic of the UFO made by the UFO investigator based on the witness description. (image credit: NICAP/CUFOS) 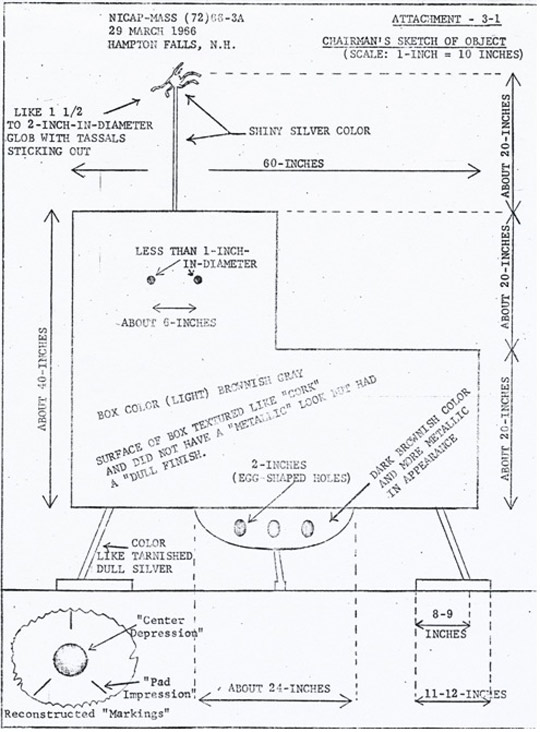 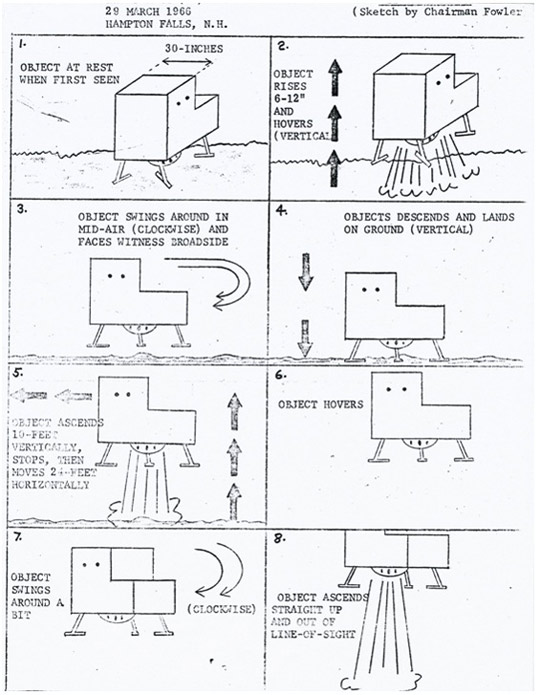 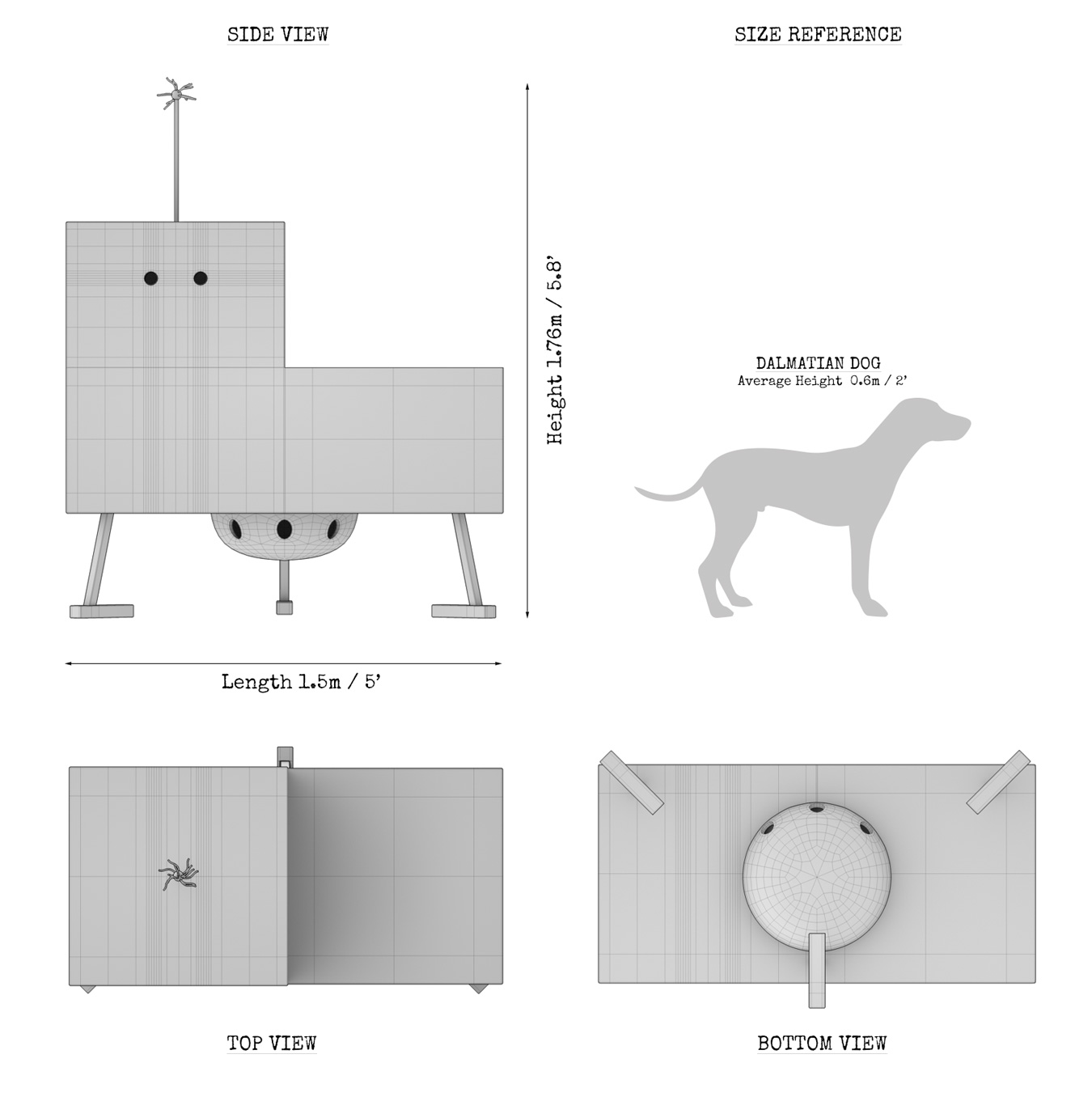